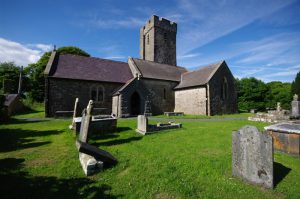 Amroth is a small coastal village in the south east corner of Pembrokeshire. The older industries of mining, farming and fishing have now been mainly overtaken by holiday activities. The name ‘Amroth’ has several possible origins, one of these being perhaps ‘Lanrath’ meaning ‘the (church)lands around a fort’. The change in the centre of gravity of the village due to the coastal development in the last century, now means that the Church lies on the northern boundary of the Parish nearly a mile from the main part of the village.
There is evidence that there had been two Churches in the Parish from early times. Irish missionaries coming to Pembrokeshire in the 4th century would have founded a very crude cell in the shelter of the rath or fort. By the 9th century there were two Churches at opposite ends of the Parish, the eastern one being a small building some 200 yards from the site of the present building.
The dedication to St Elidyr is obscure. There are three other Churches in the locality with this dedication. They are at Crunwere, Ludchurch and Stackpole Elidyr. One possibility is that they were dedicated by St Elidur de Stackpole, the processional cross bearer when Archbishop Baldwin led his crusade through Wales at the end of the 12th century. In the ‘Lives of British Saints’ the authors suggest the dedication may be to a 12th century pilgrim, ‘Elidyr the Courteous’. Or it could just be that a scribe’s error for the Welsh Saint ‘Teilo’ who was also known as ‘Eluid‘ may have mistakenly given us ‘Elidyr’.
The present Church is of 13th century Early English architectural style, the older parts being built in 1490 by John Elliot, the then builder and owner of Amroth Castle. This replaced the earlier smaller eastern and western Churches of the Parish with a single larger building.
In its original design the Church was cruciform in shape, with conventional Chancel, Nave and two transepts. The crenellated tower above the north transept has a spiral staircase in the northwest corner. In the early 16th century John Elliot added a chantry chapel to the north of the chancel. His successors at Amroth Castle, the Biddulph family, gave the chapel to the Church in 1889, and also added a vestry to the north wall of the chapel.
The Church was extended westwards in the middle of the 19th century, a new south door being added to replace the original door in the south transept. A porch with stone bench seats was added at the same time as the building of the vestry.
There are several memorial tablets in the chapel and chancel. These are mostly in memory of local gentry, but three of those on the south wall must surely be unique. Two were erected by a lady to her first three husbands, whilst the third was erected by her fourth and surviving husband! The chapel contains on its north wall memorial tablets to the Biddulph family, whilst on the west wall of the north transept there is the Parish War Memorial tablet.
The stained glass in the east window of the chancel is a depiction of the Crucifixion and was installed in 1890. In the south transept another window of the same era shows Christ walking on the sea, and bears the inscription ‘It is I, be not afraid’. In the west wall of the nave a modern stained glass window is dedicated to the memory of a local farmer who was tragically killed in a vehicle accident at Llanteg. The font, which is the same age as the Church, is Norman in style, having a square bowl decorated with sculptured foliage in relief, and set on a square stem, the plinth being formed on an inverted font basin from one of the earlier Churches. The font cover is dated late 19th century, given by a previous Vicar in memory of his infant son.
A local iron foundry cast three small bells which were hung in the belfry of the tower in 1712. In 1929 the owner of Colby Lodge paid for these bells to be recast by the Whitechapel Foundry of London into a new single large bell, and to be re-hung in the tower along with a new tenor bell. The bells can be tolled from the north transept.
The remains of the old preaching cross in the churchyard were previously on the north side of the Church, but have been moved to a new position south of the nave. This cross predates the Church and is probably 9th century in origin. It is set on three large stone steps, and it is likely that it lost its carved head at the time of the reformation in the 16th century when Cromwell ordered the destruction of all such fixtures.
The churchyard also has many old tombstones, the earliest of these being dated 1762. There are a few iron gravestones which were cast by the same local iron foundry as the three original Church bells. There is a mounting block and several stone stiles in the walls. The former for use of those who came to Church on horseback, and the latter to stop roaming animals entering the churchyard!

The church registers date from 1754, 1759 and 1786 for Marriages, Baptisms and Deaths respectively. These have been carefully photocopied, and the originals archived.
The following list of incumbents is necessarily incomplete, but gives a clear indication of the continuity of Christian worship on this site for the last 700 years:-

We hope you will enjoy your visit to this beautiful and particularly peaceful rural church. If you visit then before leaving please spend a few moments adding your own prayers of praise and thanksgiving to the prayers of those who worship and minister here. Thank you. 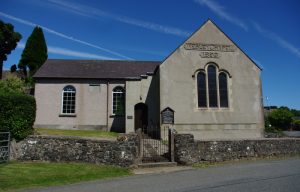 Copyright 2022 © Tides Today. By using this data, you are agreeing to the Terms and Conditions